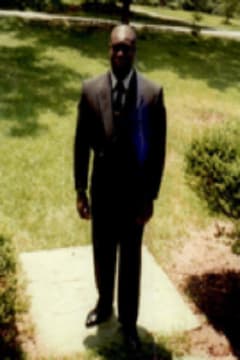 Please lift Mrs. Eleanor McIntosh, Mrs. Tammy Matthews and Family in the passing of their
nephew and cousin, respectively, in the person of Mr. Edwin "Eddie Boy" Scott of Warrenton, GA.

Edwin “Eddie Boy” Scott was born on November 6, 1962, in Miami, Florida. He was the son of Ruthie M. Roberts Robinson and Ralph Scott. Edwin was raised in Warrenton, Georgia by his lovely grandparents Mr. and Mrs. Samuel Roberts.

Edwin attended Warren County High School in Warrenton, Georgia. He played basketball and football while in high school. He was a proud graduate of the class of 1980. After graduation, Edwin entered the Marines. He served for three years.

Edwin married Robin Bonner and through this union a beautiful baby girl was born. This union also gave him nieces and nephews who love him and will miss him dearly. He was a family man, quiet but full of life. He was someone his family and friends could depend on. Edwin loved football and was a lifelong Falcons’ fan. He will be remembered for his famous chili that everyone loved.

Edwin was preceded in death by his parents, grandparents, and aunt, Mrs. Sarah Kendrick of Burlington, North Carolina. Edwin entered into rest on January 10, 2022, at Augusta University Health.

Edwin Scott's passing at the age of 60 on Tuesday, January 10, 2023 has been publicly announced by Dawson's Mortuary in Warrenton, GA.

Click a candle below to add a candle to your message.