A Beginning in Hell's Bottom In 1864, a year after President Lincoln issued the Emancipation Proclamation freeing slaves in these United States, wards where black people resided in the District of Columbia continued to have disparaging labels, i.e., “Hell’s Bottom,” “Cow Town,” and “Vinegar Hill,” to name a few. It was in the “Hell’s Bottom” ward that the Reverend Henry Bailey and ten like-minded Christian believers began worshipping in an abandoned Civil War barracks. Later, they pooled their resources, purchased a frame house, renovated it, and established it as the Fourth Baptist Church of the District of Columbia, valued at $2500.00. Among those ten believers was a Mr. Wiley Jordan, grandfather of our own Mrs. Moncerie Woolfolk.

During Rev. Bailey’s pastorate, the congregation became known as “heaven-bound in Hell’s Bottom.” Construction of the Fourth Baptist Church would mark our first period as “a church in transition.” Reverend Bailey resigned in 1870 after six years of leadership. Reverend Henry Bailey founded our congregation in 1864, in Hell's Bottom which was known as the "red light district." He served for 7 years. He was a visionary and a builder. Born a slave, he was self-taught and worked as a mason, plasterer, and whitewasher. He spent his lifetime working to "change the unjust circumstances of the Negro." READ MORE...

Mrs. Francis "Fannie" Bailey served by his side in a post-slavery Washington, DC. No. doubt she walked in step with her husband as they established the Fourth Baptist Church. They had one daughter, unfortunately, we have no photo of Mrs.Bailey.

A "Church in Transition"

That same year, 1870, Fourth Baptist Church called the Reverend Robert Johnson as its Pastor. Among the most significant changes during his thirty-three year tenure are: (1) the Church was reconstructed from the frame building it was to the Victorian Gothic style – marking our second period as “a church in transition;” (2) the name of the Church was changed to The Metropolitan Baptist Church (Colored) in 1888; (3)the membership was organized into fund-raising clubs, many names of which are familiar to some of us today, i.e., Helping Hand, Ideal Working, Metropolitan Relief, and Vigilant Clubs; and (4) a strong Usher Board was established from which Reverend Johnson often chose official leaders of the Church. Reverend Johnson went to his reward on December 18, 1903. READ MORE...

Dr. Johnson was married to Ms. Martha Hayden. She was very active in the church and believed in being a good steward and role model for her children. Her motto was "Education is the Foundation of Life." They had 2 sons and one daughter.

Sixteen months later, on April 10, 1905, Dr. Moses W. D. Norman of Elizabeth City, North Carolina, was called to shepherd this flock. His twenty-one year pastorate brought us an even greater organization of the laity to provide a sounder financial basis for the Church through tithing. As a result, material improvements and accomplishments included: (1) the installation of a magnificent pipe organ, steam heat, and electric lights; and (2) the liquidation of church indebtedness along with the burning of the mortgage. He was also a powerful speaker and the congregation grew exponentially. Reverend Dr. Moses Wilberforce DeWitt Norman passed on December 26, 1926. READ MORE...

Mrs. Fannie Bridges Norman was his first wife and she was the founder of Metropolitan's Woman's Club. She was an accomplished musician and operated a music school for many years.

After the passing of his first wife, Dr. Norman married Ms.Ethel Fitzhugh. She was heavily engaged in church ministries including the Senior Choir, Women's Club, Church Women United and Union Missionary Council. Mrs. Norman was a real estate agent.

Just under two years later, on June 29, 1928, Dr. Ernest Clarence Smith of Richmond, Virginia, was elected as our fourth administrator. During his forty-eight years with us, Reverend Smith, while maintaining a sound financial base, also sought to biblically solidify and undergird the spiritual foundation of Metropolitan’s membership. Subsequently, he established the Baptist Training Union, the Leadership Training School, the Christian Education Institute, Vacation Bible School for Children with Mrs. Moncerie Woolfolk as its first Director, and Chil- dren’s Church with the late Mrs. Jessie Corbin as its first Director. He also organized the Adult Sunday School Department and appointed the late Attorney Ruth Hankins-Nesbitt to the Trustee Board as Metropolitan’s first female representative to hold a legal Church Official post. Additionally, and while yet nurturing Metropolitan’s families, Reverend Smith; (1) guided us through the construction of Monument Hall and the E. C. Smith Youth Center; (2) served for 23 years as an instructor at Howard University’s School of Religion; (3) authored books, pamphlets, and articles; (4) preached with power and traveled extensively throughout these United States, yea, even the world. After forty-eight years of unstinting service, Reverend Smith retired on January 31, 1977, and remained as “Pastor Emeritus” until his passing on January 12, 1988. READ MORE...

Dr.Smith's first wife was Mrs. Mamie O. Smith. She is most remembered for her warm spirit and charming disposition. She served as Vice President of the Deaconess Board, Financial Secretary of the Union Missionary Circle, and a member of the Women's club. This couple has 2 sons. Following the passing of his first wife, Dr.Smith married Mrs.Dorothy Butler. She was very active not only in church ministries but also in the community. She founded the Quester's a women's service organization in Washington, DC. There are Questers in our congregation today. On June 17, 1977, the Metropolitan Baptist Church elected Dr. Henry Beecher Hicks, Jr., from Houston, Texas, as its fifth administrator. Dr. Hicks brought to Metropolitan new and innovative methods of solidifying the membership base while simultaneously “spreading the Gospel to others.” Among other things, he (1) started a closed-circuit video worship service, (2) established a Weekly Radio Ministry as well as a 24-hour Prayer Line Ministry, (3) organized a Prayer Partners Ministry and a Lay Ministry (designed to touch every member regardless of location), and (4) partnered with Delta Sigma Theta Sorority to jointly sponsor a Literacy Program enabling young men and women to acquire at least a GED certificate. In 1985, Dr. Hicks also guided the Metropolitan family through the renovation and complete restoration of the Main Sanctuary. He embraced and encouraged men and women to the Preaching Ministry as well as the infrastructural development of the church. Subsequently, Dr. Cheryl Price became Metropolitan’s first female to be ordained to the Preaching Ministry, and, on December 12, 1992, Carolene Gloria Johnson, Virgie Hamlin Jones, Clara Baines Love, Brenda Girton-Mitchell (now Reverend), Georgia Bishop Whitted, and the late Barbara Elaine Wilkinson were Metropolitan’s first females ordained to the Diaconate Ministry. In 2009, Dr. Hicks appointed Chairwoman B. J. Brooks as the first female chair of the Diaconate Ministry in the church’s 145-year history.

Dr. Hicks is a well-known author. His “Preaching Through A Storm” is now in its twelfth printing and it is a required text in many seminaries across the country. Some of his other writings include “On Jordan’s Stormy Banks,” “Correspondence With A Cripple From Tarsus,” and “Kindling Wood,” co-authored with the late Dr. E. C. Smith. Dr.Hicks is married to Dr. Elizabeth Harrison Hicks, affectionately call Lady Liz. Dr. Hicks is an educator. She served as president of the Women's Ministry for many years and founded FAME--Fine Arts and Metropolitan and its Environment. She was also active in community organizations.

The Hickses have three children and five grandchildren.

History of our First Ladies Video 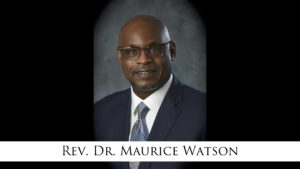 In 2014, Dr. Maurice Watson became Metropolitan’s sixth pastor in her 150-year history. A dynamic preacher, pastor, and leader, he brought 33 years of pastoral experience to the great Metropolitan pulpit. He received a Bachelor of Arts Degree in Education from Philander Smith College in Little Rock, Arkansas; earned a Master of Arts Degree in Theology from Creighton University in Omaha, Nebraska; and earned a Doctor of Ministry Degree from Beeson Divinity School in Birmingham, Alabama. Dr. Watson's first pastorate was at St. Mark Baptist Church in Little Rock, where he served for 7 years. In November 1988, he accepted the call to pastor the Salem Baptist Church in Omaha, Nebraska, where he served for 15½ years. In early 2004, sensing a new call of God on his life, Dr. Watson accepted the senior pastorate of Beulahland Bible Church in Macon, Georgia. His leadership took Beulahland to a second location in Warner Robins, Georgia, in February 2005. At the renewed urging of the Holy Spirit, Dr. Watson accepted God’s call to Metropolitan Baptist Church in November 2014. He brought his anointed pastoral, preaching, and ministry gifts to Metropolitan, proclaiming that “…a new day is coming, with hope and possibilities!” He preached his first sermon as Metropolitan’s Senior Servant on January 4, 2015 and his final sermon on September 4, 2022, as he returned to his native Little Rock, Arkansas, to pastor The Second Baptist Church. He is married to Mrs. Janice Watson and they have two lovely daughters, one son-in-law, and one grandson. Dr. Watson is married to Mrs. Janice Watson who immediately endeared herself to the Metropolitan Family with her sweet, humble spirit. With her servant's heart, she quickly touched almost every Metropolitan Ministry upon her arrival. Perhaps you saw her serving as an usher or driving the Church shuttle, teaching in Children's Church, serving as a Greeter on Sunday mornings, or singing in the Women's Day Choir. She and Pastor Watson have two daughters, one son-in-law, and one grandson.