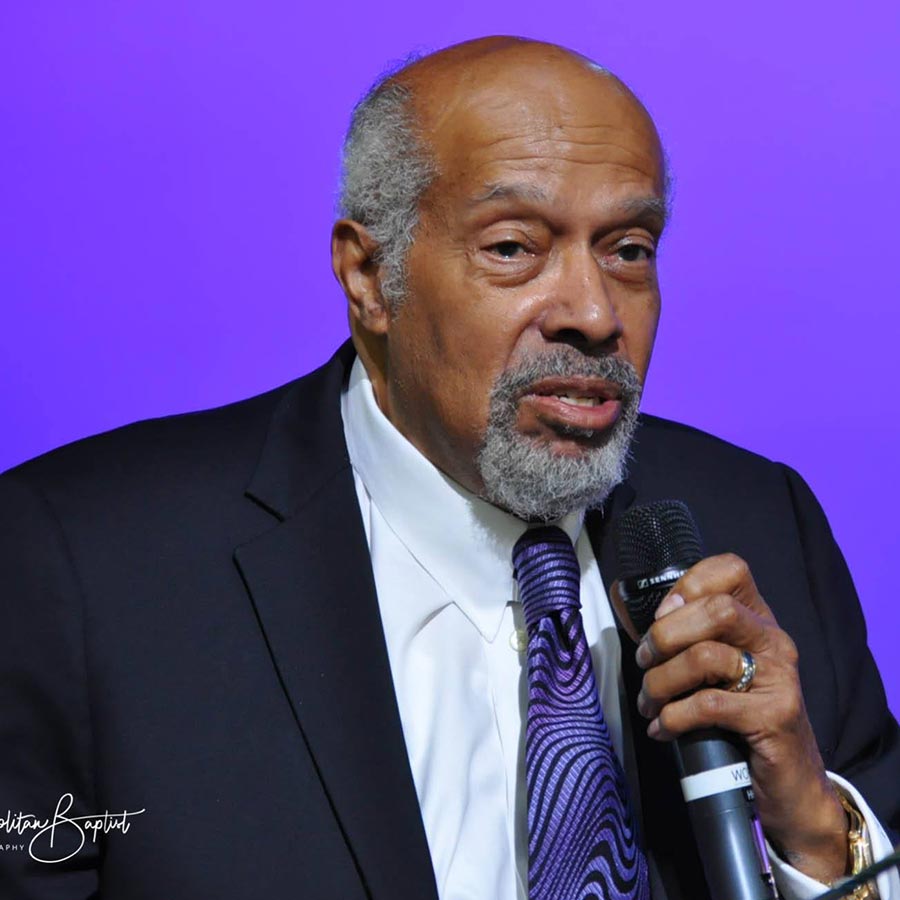 From 1977 to 2015, Dr. H. Beecher Hicks, Jr., exercised his calling to the Gospel Ministry as Senior Servant of the historic Metropolitan Baptist Church in the District of Columbia. His retirement on December 31, 2014 brought closure to a pastoral ministry of forty-nine years, and a preaching ministry of fifty-three. He was licensed and ordained to preach the Gospel by the Mount Olivet Baptist Church of Columbus, Ohio and is the second of three children born to the late Dr. H. Beecher, Sr., and Mrs. Eleanor Frazier Hicks.

As fifth pastor of the Metropolitan congregation, Dr. Hicks worked diligently to develop one of the world’s foremost Christian congregations, distinguished by its fervent worship and prophetic preaching. Vitally involved in community ministry, Dr. Hicks guided the work of the church toward literally feeding the hungry and clothing the naked through various venues. The Metropolitan Day STEM School (Pre-K through grade 5) designed to provide an Afro-centric educational environment for children, the Metropolitan Community Development Corporation (created to aid the community in terms of economic and employment initiatives), Metropolitan/Delta Adult Literacy Council, a joint venture with Delta Sigma Theta Sorority, Inc., was designed to teach adults basic reading skills, and The Garments Hem was created to provide Christian psychological and emotional health therapy care.—all are the various means by which the ministry of Metropolitan was extended into the community under the leadership of Dr. Hicks.

Dr. Hicks is a 1964 Honor Graduate of the University of Arkansas at Pine Bluff. A recipient of the Rockefeller Protestant Fellowship, Dr. Hicks graduated from Colgate Rochester Divinity School in May 1967. Selected as one of the original Martin Luther King Fellows at the Colgate Rochester Divinity School in 1972, his studies included the University of Nigeria, the University of Ghana and the University of Science and Technology in Kumasi, Ghana. He earned the Doctor of Ministry in Theology degree in 1975. Subsequently, Judson Press published his dissertation, Images of the Black Preacher in 1977. In 1999, he earned the Master of Business Administration from the George Washington University. In 2008 Morehouse College of Atlanta, Georgia honored Dr. Hicks with an honorary Doctor of Humane Letters Degree.
In addition, Dr. Hicks is President of H. Beecher Hicks Ministries, a management consulting firm specializing in church organization, church leadership and pastoral skills development. His memberships include the Jonathan Davis Consistory, 33rd degree, Most Worshipful Prince Hall Grand Lodge. In addition, he is a member of Omega Psi Phi Fraternity and Sigma Pi Phi Fraternity (Boule).

The author of seven books, Dr. Hicks is a prolific writer, and is widely published in religious periodicals. The three most popular of his writings include: On Jordan’s Stormy Banks [2004], My Soul’s Been Anchored [1998] and Preaching Through A Storm [1987, 12th printing]. In 1992 Ebony Magazine honored Dr. Hicks as one of the fifteen greatest black preachers in America. He has been inducted into the Morehouse College of Preachers, named Distinguished Preacher, Riverside Church, New York City, named Keynote Preacher for the Baptist World Congress in Sydney, Australia in 2000, named Conference Lecturer in 2002 and Conference Preacher for the 95th Annual Hampton University Minister’s Conference in 2009. In 2011, he was designated as a “Living Legend” by the E. K. Bailey Expository Preachers Conference. Over the course of his ministry, Dr. Hicks licensed and/or ordained over two hundred preachers of the Gospel. His particularly trailblazing efforts in the ordination of women have made him a pivotal person in the Washington religious community. Following his retirement, by God’s grace, he continues to teach and preach. And that is why they call him, “The Preacher’s Preacher!”

Dr. Hicks is married to Dr. Elizabeth Harrison Hicks and they are the parents of three children, H. Beecher, III., Ivan Douglas Hicks, and Kristin Elizabeth Hicks, as well as the proud grandparents of three granddaughters, Austynn, Ashley and Anya, and two grandsons, Henry IV and Harrison Patton.